Boulder’s 2014 Transportation Master Plan (TMP) outlines transportation demand management (TDM) solutions that offer travel choices while improving the efficiency of the transportation system. One of the most effective strategies implemented by the City of Boulder is its neighborhood-level approach to TDM programs. This case study outlines two major components of the City’s TDM program: Neighborhood Transit Passes and a TDM Access District.

The Regional Transportation District (RTD) EcoPass is a bulk-rate, discounted transit pass that is purchased from RTD. It provides unlimited usage of RTD services, including any local or regional bus, Boulder’s Community Transit Network, Skyride bus service to the airport, and light rail and commuter rail.

The RTP EcoPass program is one of the most effective TDM programs for changing travel behavior. The EcoPass Program is available to employers, neighborhoods, and universities. The availability to neighborhoods is a unique and effective mechanism for providing widespread access to public transit. The Neighborhood EcoPass (NECO Pass) program allows neighborhoods in the City of Boulder to bulk purchase NECO passes for every eligible household within the defined neighborhood. In 2017, the NECO Pass Program included 11,298 eligible households. The City of Boulder encourages neighborhood participation by providing a subsidy of 50% to first-time neighborhoods, and 30-35% subsidy in ensuing years.

The graph below depicts the number of households and residents that qualify for a NECO pass because they are within a neighborhood participating in the program. Participation and eligibility in the NECO pass has increased over time, but has slightly plateaued in recent years, likely due to an increase the NECO pass cost. 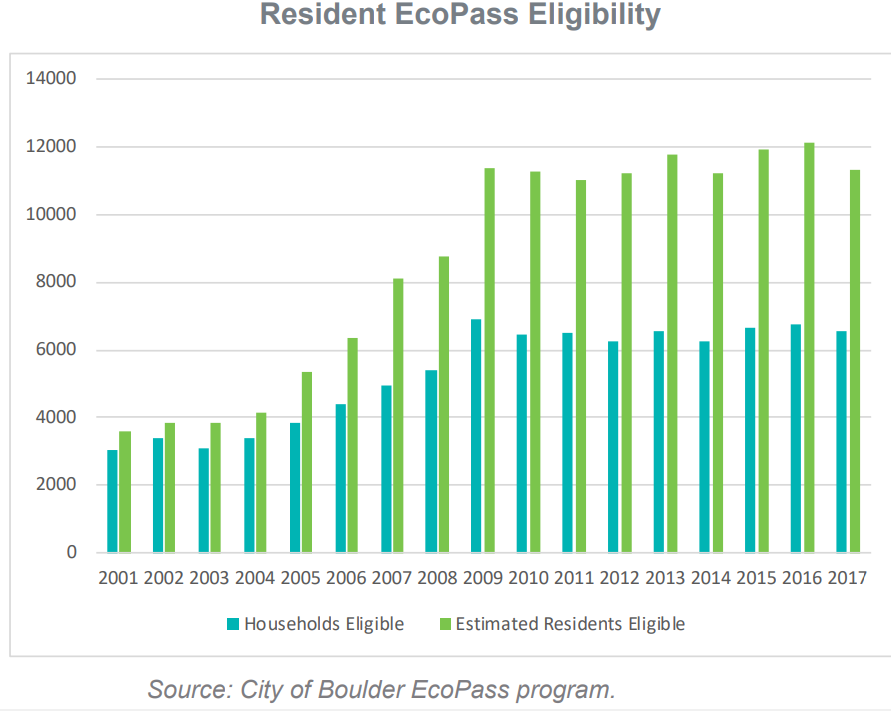 Boulder Junction, a newly developed neighborhood in the City of Boulder, has been piloted as a “TDM Access District”. The goal of the TDM Access District is to create a new pedestrian-oriented neighborhood, allowing for mixed use and increased density without increasing vehicle trips. The district combines TDM measures like parking maximums and subsidized transit passes with land use considerations such as higher density and mixed-use development. The area stipulates a maximum mode share for SOVs at 45%.

To achieve the low rate of SOV travel, Boulder Junction’s zoning code caps parking spaces at one per residential unit and collects property taxes within the area that fund full participation in the Eco Pass program for the area at no cost to residents and employees. In 2017, the first evaluation of vehicle trip generation showed approximately 58 percent of afternoon peak hour trips were SOV trips. While the ordinance target has not been met yet, Boulder Junction is already performing better than the rest of the city outside of the Downtown. The City of Boulder is currently working with RTD to increase bus service to the district. However, RTD prefers to see more ridership before investing in another, more frequent route. Ridership will likely increase as the District is built out and major employers move into the area. TDM services will continue to be added and assessed in order to reach the 45 percent SOV goal.

In 2016, the estimated number of vehicle miles traveled (VMT) per day in Boulder Valley is about 2.5 million. This is only slightly above the 1994 baseline. The 2014 TMP sets an aggressive target of 1.9 million miles per day by 2035 (a 20 percent reduction from the baseline).

The City of Boulder is on track to meet the TMP goals. However the Boulder Valley region is not. According to the 2017 Boulder Valley Employee Survey, 48 percent of employed Boulder residents drive alone to work. This is down from 59 percent in 2011. Comparatively, 78 percent of non-Boulder residents drive alone to work which has remained constant since 1991. TDM measures are more difficult to implement in less-dense, suburban areas outside of the city boundaries.

The Transportation Master Plan indicates that rate of mode shift is flattening or even reversing. This suggests that the current set of TDM measures may be plateauing in their effectiveness. Increases in vehicle count results and in vehicles entering signalized intersections likely reflect continued population and employment growth as well as low gas prices.

Another challenge is that funding is becoming more limited. Additional funding will be needed to support TDM programs and increase the rate of mode shift. In 2018, RTD’s Pass Program Working Group recommended pricing the NECO pass based on the number and types of trips taken from the residents of a neighborhood, rather than a flat rate per person. This change in pricing will be implementing in early 2019 and may decrease participation in the NECO pass program.

Social equity is an important aspect of any TDM program. Since the NECO pass program is a volunteer-driven effort, many lower-income residents are excluded because they can’t afford to donate their time to initiate a NECO pass program in their neighborhood. Although qualifying low-income residents can apply for a discounted pass, they can’t receive the benefits of the NECO pass if they are unable to gather support in their neighborhood.

Potential new opportunities to expand TDM measures and the transportation network include: a city-wide EcoPass, expanding Access Management Districts using Boulder Junction as a model, reallocating street space to make biking and walking safer, and implementing corridor studies to improve the speed and reliability of local and regional transit connections.