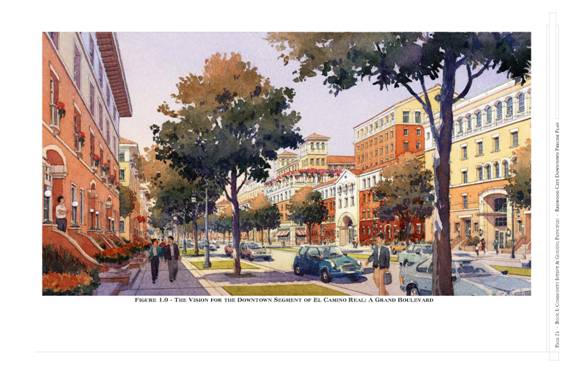 The Downtown Precise Plan (DTPP) is the new zoning document for Downtown Redwood City, and the General Plan has been updated to match its vision and policies. The DTPP will be a very powerful force in stimulating housing and job growth in this strategic location, including El Camino Real. It simplifies the approval process for developers; clearly specifies what is and isn’t allowed; reduces the need for environmental work from developers; and allows for a wide range of densities, with height limits up to 12 stories and no cap on dwelling densities for individual projects. By creating a dense, mixed-use, walkable district featuring a large job base and a regional mass transit connection, the DTPP provides one of the most environmentally sustainable development patterns possible.

Sunnyvale’s Precise Plan focuses on 4 opportunity areas (“nodes”) along El Camino Real which are targeted for intensification of density via mixed-use developments. Building on the example of the Cherry Orchard project at El Camino and Mathilda Avenue, the Plan’s goal is to encourage retail, office and residential to coexist and be mutually supportive. The Plan includes design guidelines for site development, building design, neighborhood interface, and a variety of specific uses. Future considerations include greater integration to Downtown Sunnyvale and the city’s Caltrain station.

The proposed project creates a pedestrian/transit plaza at Samtrans’ highest demand boarding location with appropriately sized shelters and pergola/wind screen to protect users from the elements, safety lighting, benches, trash/recycle receptacles and other pedestrian amenities. It provides an integrated pedestrian environment with wider, continuous sidewalks linking the plaza with nearby high demand activity centers including the Landmark Plaza development and the War Memorial Community Center, another award winner.

The planned Trestle Glen Apartments will provide 119 units of affordable housing and a child care center at the Colma BART Station, adjacent to a major Samtrans bus depot and El Camino Real. BRIDGE Housing is developing the project in conjunction with the County of San Mateo’s Department of Housing and other local funders. Incorporating design elements from nearby residential neighborhoods, and teamed with a new 32-unit townhouse development for entry-level buyers, this project is designed to meet transit goals while dramatically improving current conditions. 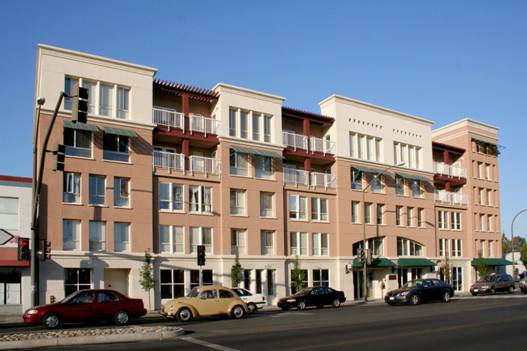 This multi-family rental project has 58 very low and extremely low income units, 1250 square feet of commercial space on the ground floor, and is consistent with the City’s Downtown Precise Plan, including harmonizing architecturally with nearby properties. The building was developed by First Community Housing in conjunction with city and county partners, as well as Habitat for Humanity, who built adjacent low-cost, owner-occupied townhouses. It has rooftop solar and other features that will make it the first LEED-certified multi-family building in San Mateo County.

Improvements to the War Memorial Community Center created a 40,000 square foot facility includes a new 7,000 square foot library, two gymnasiums, offices, sub-dividable meeting spaces, a computer lab with high speed internet, and two kitchens. Although the facility has increased in overall square footage, the site was designed to allow for landscaped open space along Mission Street. It also helped provide the catalyst for the City to design improvements to Mission Street in the “Top of the Hill” area to enhance the pedestrian/transit experience.